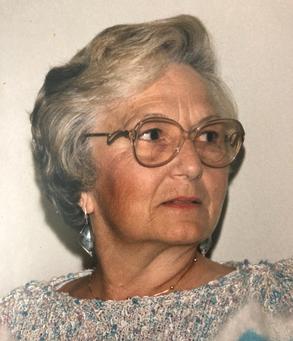 Belle Shirley Herrick Playdon
Passed away early Saturday morning, at the age of 91, at the DeBary Health and Rehabilitation Center in DeBary, Florida on November 17. 2018 from a prolonged illness.  She entered this world on January 16, 1927 as the fourth child and only daughter of Elmer S. Herrick and Clarabel Rodgers of Malden Massachusetts.  She was the last of her siblings, Sumner “Sunny” Herrick, Leonard Francis Herrick and Frank Richard Herrick known as “Dick”, all of whom predeceased Belle.  Being the youngest, she took a lifetime of kidding by her brothers.
Belle spend most of her life in New England living in Methuen and Southborough, MA; Salem, Exeter, and Claremont, NH and Oquossoc, ME.
A 1944 graduate of Edward F. Searles High School, Methuen, MA, Belle married her long time sweetheart Robert L. Playdon of Salem, NH on October 9, 1948.  Although they had no children of their own, Belle took on the role of mother to Lisa M. Maselli, originally of Southborough and passed on her love and skill of sewing, baking and botanical cultivation.  She was an avid collector of stamps and coins.  Her hobbies included quiltmaking, knitting, needlepoint, gardening, bird watching, baking and making her highly sought after almond rocka candy.  Outgoing, Belle enjoyed social activities such as BINGO, card playing, board games, fishing, bowling, skiing and golf.  She raised parakeets and was a master at all of her endeavors.
Her canine children Specs, Paula, Lady, Sissa and Wally gave her great joy.  She was especially fond of Boston Terriers, iris and hummingbirds.  She named her tiny street in Oquossoc, Hummingbird Lane. Her cottage on Rangeley Lake was the place of much merriment, where she was well known for being a prankster.
Belle held the position of Executive Secretary at Fenwall, Inc., Ashland MA, and Customer Service Manager at D. G. O’Brien, Inc., Framingham. MA and Seabrook, NH for 10 and 20 years respectively. She acquired her Massachusetts Real Estate Brokers license in 1985 and was very active in the National Secretary’s Association.
She leaves behind her beloved niece, Judith (Herrick) Lawrence, her caretaker; grandnephew Stephen Christopher Lawrence, his wife Wendy and their two daughters, Cierra and Ariana of Orange City, Florida; nephew Br. Sumner Herrick of Brownsville, Texas; his sister predeceased niece Linda (Herrick) Tine and her daughter Leeann (BenDavid) Cavallaro of Newburyport, MA; nieces Leigh and Deborah Herrick of North Carolina; godchild Ryan Amanda Maselli and her son Brooks Alexander Turner of Nashua, NH and adopted daughter, Lisa M. Maselli, Northborough, MA
A memorial service will be scheduled at the Oquossoc Log Church, ME  for sometime in the summer of 2019. Belle will live on in our hearts as an energetic, kind, generous, highly skilled and exceptional soul.  We love you.