Guy John Spontino
Guy Spontino, 57, unexpectedly passed away on Thursday, January 9, 2020 at Fish Memorial Hospital in Orange City, FL with his loving wife by his side.

Guy was born in New Haven, CT to John and Sarah Spontino. After always wanting a baby boy, Sarah was overjoyed at Guy’s birth. He was and always remained the apple in his mother’s eye. Despite giving his mother more than a few gray hairs, Guy was a kind and loving man and a true mama’s boy, maintaining a close relationship with his mother until her passing. He attended Notre Dame High School and Johnson and Wales University where he studied to become a chef. He had a true passion for cooking with a particular love of Italian cuisine. His career as a chef was fulfilled with various jobs including many italian restaurants and a cruise line. Additionally, Guy was an animal lover and took pride and joy in his Rottweilers. Guy dedicated a great deal of time to his four-legged furry children. He trained, bred, and showed his dogs in various competitions. Guy was a simple yet multifaceted man who followed his pursuit of happiness through various adventures including owning a landscaping business to the Wyld K Farm. He had big dreams and hopes for he and his wife.

In addition to his Italian pride, Guy was a God-fearing, proud American as evidenced by his frequent patriotic Facebook shares and bold opinions. Guy was raised in Branford, CT until moving to Hilton Head, SC after college to bask in the warmer weather. He truly enjoyed South Carolina but eventually continued his travels south and ended up on a farm in Florida. He had high hopes for this new adventure and the prospect of running a working farm. Although born and raised in Connecticut, he was a Southerner at heart. Guy didn’t care about appearances but looked deep within, treating others with acceptance. Despite his strong beliefs, Italian fieriness, and at times stubborn tendencies, Guy had a big heart and a gentle soul. He could often be found enjoying time with his wife and the slow paced southern life. He opened his heart and home to anyone, giving what he could. He had an ability to recognize his blessings in comparison to those around him and loved connecting with people. He would often phone family in CT (in particular his eldest sister, Barbara) to chat and catch up on life.

His Connecticut friends and family are welcomed to celebrate Guy’s life at a memorial service on Saturday, February 1 at 10:00 a.m. at St. Joseph’s Church 50 Fairmont Place, Shelton, CT.

In lieu of flowers, donations may be made in Guy’s honor to Fidelco or the New Haven Animal Shelter. 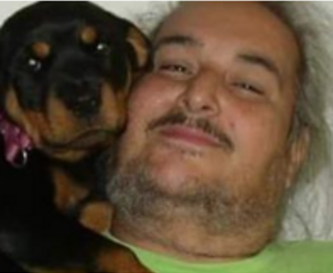