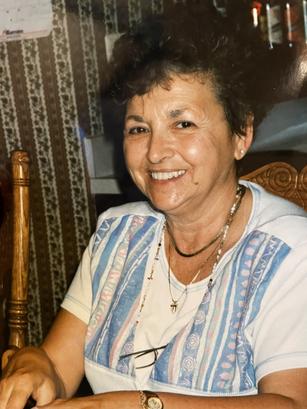 Iris E. Berger, 86 of Port Orange, Florida passed away on November 6, 2020. She was born on December 8, 1933 in Baltimore, Maryland to Philip Epstein and Bell Okun. Iris worked in Construction as a Bookkeeper. Well-known for her sharp wit, she tended to make laughter but also trouble wherever she went. A Messianic Jew, Iris was passionate about sharing God’s love. She and her husband, Harry helped to start a fellowship in Port Orange called Beth Judah. For the 20-plus years that Iris lived in Florida, they were well-known as that couple with the brown van who could be found handing out faith, food, blankets, and clothes to those down on their luck on the streets of Daytona. Iris was a collector, dealing in various things— seashells, finches, plants, good deals, movie musicals and interesting stories.

She enjoyed traveling especially to visit her grandchildren. Creative and silly, she was determined to bring the happiness and adventure that was lacking in her own childhood into each of their lives.

In her very best moments, Iris was beautiful, elegant, generous and funny.

Similar to others of her generation, she was a pragmatic survivor. She was persistent—She fell down and she got back up. She did things her own way, pushing until she got the results she wanted. She longed for greatness, saw potential for change, was always curious and hungry for more. While her methods were sometimes unconventional, she wanted to be better than she was. She passed her grit and resolve onto us in the grand fashion that was hers alone.

We will miss her, but we believe she is finally at rest and full of joy.

Iris was preceded in death by her husband Harry Berger and sister Sandra.  She is survived by her daughter Cynthia Metzger, sons: Michael Macklin and Richard Macklin, two half siblings: Jay Lessans and Debbie Wasser as well as 8 grandchildren and two great-grandchildren. She will be greatly missed by her family and friends.