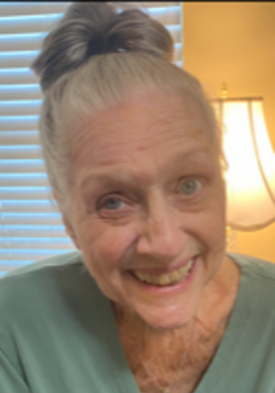 Patricia Gibson Smith, 87, passed away peacefully at home surrounded by her beloved husband Joseph and cherished daughter and son in law Maria and Mike Enzor who lovingly cared for her during the last year of her life. She is predeceased by her parents Leon and Margelet Gibson. Pat was a drama major who moved to New York City to pursue her acting career and performed in many off Broadway productions. She was a loving mother, step-mother and wife who worked for many years as the activities director at Winter Park Towers in Winter Park Fl until her retirement in 2003. Her true passion throughout her life though was her love of theater and after moving to Cheraw, SC she was able to highlight her many talents through her involvement at Cheraw’s Theater On The Green and spearheaded many community theater productions.

During her life she was devoted to her family and known for her endless generosity and unselfish spirit. She was a member of the Red Hat Society in Cheraw, SC and always looked forward to the time she spent with like minded friends enjoying a glass or two of wine and good conversation. She is survived by her Husband Joseph H. Smith, her daughter Maria Enzor (husband  Mike Enzor)of Deltona, Fl and Step-Daughter Julie A. Smith of Cheraw, SC all of which will forever hold her near and dear to their hearts.

The family would like to also extend their sincere gratitude to Dr. Wayne Barry and his staff at Vitas Hospice for the phenomenal care they provided to her in the last months of her life. Their compassion and devotion to her end of life care was extraordinary and appreciated more than words can say. Private Family funeral service Fayetteville, NC.