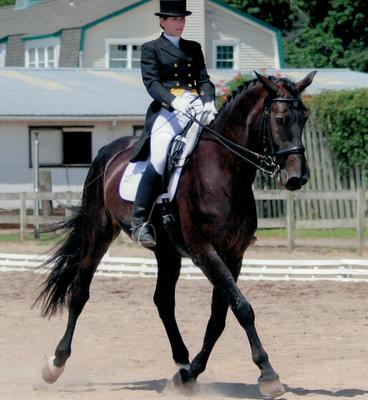 Tamra Ann Brown, 47 of Casselberry, Florida passed away on Saturday, November 23, 2019.  She was born on March 21, 1972 in Minneapolis, Minnesota to Kenneth J. Brown and Sharon R. Lee.  She worked in the Equestrian Sports Industry as an Assistant Trainer.

Over the years, Tamra had been given the ride on many talented horses, the majority of whom she trained to the upper levels herself, and several to Grand Prix.  In 2007, she was awarded her USDF Silver Medal and also became the Intermediare Champion for Region 8. In 2009, Tamra was a featured clinician at the Midwest Horse Fair in Wisconsin, one of the largest three-day horse fairs in the country. Tamra has also successfully shown in CDI competitions.  Her primary partner at the time was the Dutch Warmblood breeding stallion Leoliet (Zioliet x Dorien).  With him, she competed in CDIs in both Prix St. Georges and Intermediare I at Dressage at Devon, Zada Enterprises’ Zada Cup, and the German Equestrian Alliance Cup, a PanAm games qualifier.

Tamra was a published book author in the fantasy/magic genre. She was a prolific poetry writer and short story writer.

Tamra was an artist in drawing.  She was a deep thinker and was reading up on physics,  astronomy,  as well as political theories.  Tamra was a strong,  independent,  often private and reclusive.  She worked physically very hard and was most passionate about her professional life and animals. She was respected and looked up to and sought after for her skills.

She loved nature and outdoor activities - especially mountain bike riding,  tennis, running and exploring.  Tamra will greatly be missed by her family and friends.

A Celebration of Life will be held on January 18, 2020 from 1pm to 3pm at Knoll Farm in Chuluota Florida.